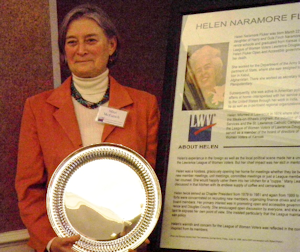 The award, named after a long-time member of the League, is given each year to recognize an individual for promoting open and accessible government at all levels.

KABC, originally known as Kansans for improvement of Nursing Homes, is a statewide advocacy group that works on issues such as long-term care and elder abuse. The organization was founded in Lawrence in 1966 by Anna “Petey” Cerf.

In addition to her work with KABC, the League noted, McFatrich also works with groups such as the Douglas County Coalition on Aging and Kaw Valley OWL. She helps coordinate the annual legislative forum on senior issues, provides legislative progress reports and assists seniors in participating in the governmental process.

A luncheon in McFatrich’s honor was on March 9 at the Smith Center at Brandon Woods, 1501 Inverness Dr.