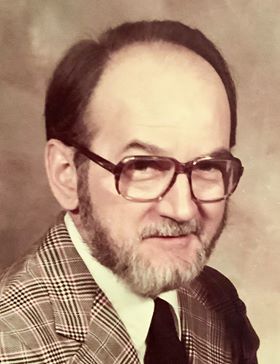 My dad John Glinka was one of 8 kids of Polish immigrants.  He was born and raised in the Strawberry Hill area of Kansas City, KS. It was a tough childhood; when he was 11, his father died suddenly and he had to get a job but he continued his schooling until WWII interrupted.  Enlisting in the Army, he went to radio school and was shipped out to Guadalcanal. After discharge from the service, he finished a degree in Library Science at Emporia State Teachers College and landed a job at KU’s Watson Library.  His lifelong library career began in the mail room, and eventually he became Associate Dean of Libraries, retiring after 36 years to care for his wife who had ALS.

When I was little, our family would listen to an FM radio station in Kansas City which broadcast an hour of classical music every weekend played by the Kansas City Philharmonic. I knew when I heard the strains from Strauss’ Der Rosenkavalier it was time to get to the living room to listen with the rest of the family.

Dad loved music and had always wanted to play an instrument, but just didn’t seem to have the facility for guitar or piano.  I gave him a harmonica at some point, thinking he might be able to make headway with that. He never pursued it that I know of, but his love of music is what encouraged me to take up the violin and eventually become a music therapy major at KU.

Dad was diagnosed with Alzheimer’s in 2010 and we made adjustments at home to make sure he was well cared for and safe.  When it became obvious that he would need more care than could be given at home, he was placed at a local nursing facility on hospice care.  We began saying our goodbyes and making final arrangements, but as it sometimes happens, he began improving, and was soon able to be up in a wheelchair for meals and short jaunts up and down the hallways.

We all visited as much as we could.  I remember entering his unit one day about 2 months after his intake, and I heard someone playing the piano, accompanied by someone playing the harmonica.  I followed the sound of the music and was extremely surprised and somewhat overwhelmed to find my dad sitting in his wheelchair playing the harmonica alongside the piano player.  I stood and listened for quite awhile, and I have to admit I actually laughed a few times from the sheer joy of watching him conquer something even in the haze of Alzheimer’s. When he got tired of playing, I took him back to his room.  Afterward, I asked several times when and where he had learned to play, but he couldn’t tell me. No matter, he was obviously enjoying transporting himself somewhere else with the music and I was thankful for that. As his Alzheimer’s progressed, he withdrew and eventually stopped playing the harmonica, but I made sure every time I left him I put one of his favorite CDs on loop to help him rest better.  I’m sure it helped.

I believe that music can touch people on levels nothing else can reach, and while it won’t make someone “themselves” again, it can provide a calming influence and possibly a bridge to unknown talents.